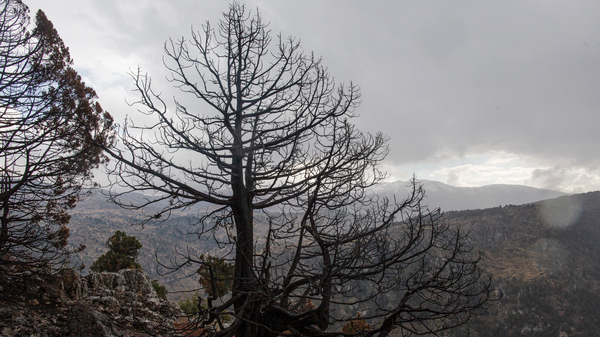 A symbol of Lebanon’s resilience through its long, turbulent history, the country’s towering cedars now face increasing threats from wildfire and parasites, both fueled by global warming.

Related Topics:Latest NewsNews
Up Next

‘Slow Down,’ ‘Don’t Quit’: Advice From 7 Women Who Overcame Their Pandemic Struggles

The startup, which sells software to neighborhood automotive shops to digitize their operations, had struggled to capture capital from venture firms. Until recently, its sole major investor was aftermarket automotive giant Bosch.

For companies like Shop-Ware, the disruptive wake of COVID-19 has cleared a path to capital as mainstream investors have sought out startups with services and products needed in the pandemic era. Investors finally get Shop-Ware founder Carolyn Coquillette’s vision and business. Their endorsement: $15 million in funding through a Series A round led by Insight Partners.

“It’s a different level of validation in terms of this industry going through a transition and catching the eye of traditional investors,” Coquillette said.

Coquillette says Shop-Ware will use he funds to fuel growth across its operations, sales and marketing teams.

The fresh capital comes as Shop-Ware has tripled its customer base while also lowering churn, Coquillette said, although she would not disclose total revenue numbers or whether the company is profitable.

The idea of Shop-Ware began when Coquillette started her own San Francisco-based auto shop, Luscious Garage, in 2007. The goal from the get-go was to offer customers a peek into what happens in an auto shop. It meant more communications from the repair-person to the car-owner, and a software platform was the best way to do it. Eventually, the push for modernized software became less of an in-house project and more of a standalone company. By 2015, she had a product and an incorporated company.

Shop-Ware helps auto-repair shops streamline operations both inside and out of the shop. Auto-repair shops are able to use Shop-Ware to track employee hours, inventory ordering and management and integrate with third-party tools such as Quickbooks. Shop-Ware also helps the neighborhood auto-repair worker communicate and charge customers through text or a web-based interface.

The intricacies of car ownership are something that Coquillette thinks that the average consumer doesn’t understand, so she built an entire business around adding more transparency to the clunky process.

“There is no way that a normal person is going to appreciate what it takes to fix their car,” Coquillette said. “The car is built to distract you and hide its complication for you by design so that you agree to buy it.” In other words, she says, you’re buying a “magic carpet.”

It’s an easy pitch for the most part, the founder says.

“Everybody who owns the car has gone to a repair shop and had an unsavory experience,” she said. “It’s pretty obvious to be like ‘oh yeah, you can make that experience less unsavory.’”

The real roadblock for the startup is convincing a business to adopt technology to change a process that isn’t technically broken. COVID-19 has been the impetus for auto shops — some of which have been steadfast in their pen-and-paper approach —to turn to a digital platform to communicate and operate.

The sector of digitizing auto-repair processes has grown considerably since Shop-Ware first launched five years ago.

Concierge startups such as CarDash and Wrench have popped up over the past several years to give customers an easier way to request maintenance checks. The services consolidate auto repair shops under one, approachable umbrella, which Coquillette thinks is the wrong approach.

“I’m a real big believer that you need to enable those independent providers,” she said. “You have to basically let those special snowflakes be their own snowflakes.”

A closer competitor to Shop-Ware is Shopmonkey, which raised a $25 million Bessemer-led Series B in August. It is welcome competition, Coquillette remarks, because it has put an investment spotlight on the category.

“There’s been a wakeup call around autonomy and how we related to our cars,” she said.

Now it’s up to Shop-Ware to take that wakeup call and turn it into cash.

Looking Glass’s next product is a holographic digital photo frame

Looking Glass’s technology is extremely cool, but has, thus far, been prohibitively expensive, ranging from $600 for its 8.9-inch product to $6,000 for the 15-inch model — and an undisclosed sum for its 32-inch 8K display. Portrait might not be the most technically ambitious or versatile product the Brooklyn-based startup has produced, but it’s easily the most accessible.

At $349, it’s still not cheap (though it’s $199 if you get in early via Kickstarter), but it has to be one of the most affordable holographic displays on the market. Along with the pricing, the company is taking a more populist approach to functionality, as well, offering up what is essentially a very advanced digital photo frame. The system offers up to 100 different perspectives on a 3D image, which, unlike products like Sony’s new 3D display, can be viewed by multiple people at once.

The system can also be run without being tethered to a computer. Its standalone mode relies on a built-in computer to deliver a 60 FPS holographic image. Those photos, meanwhile, can be captured with an iPhone and edited into a 3D image using the included HoloPlay Studio software. Holographic videos can also be captured with Azure Kinect and Intel RealSense cameras.

“It’s the first step toward holographic video calls,” the company notes, perhaps tipping its hand a bit about future plans.

“Ever since I was a little kid, I dreamed of the moment that I’d be able to have a holographic display of my own,” CEO Shawn Frayne says in the release. “I imagined what it would be like to send someone a holographic birthday message, or to say hello as a hologram to my great-great-great granddaughter. Looking Glass Portrait, the culmination of six years of work by our Brooklyn and Hong Kong based team, makes those dreams real for more people than ever before.”

The Portrait goes up on Kickstarter today, and will be available to early backers for $199.

Jio Platforms, the biggest telecom operator in India and which has raised over $20 billion from Facebook, Google and other high-profile investors this year, is leading a financing round of a San Francisco-based startup that develops augmented-reality mobile games.

Jio has led the Series A fundraise of Krikey, founded by sisters Jhanvi and Ketaki Shriram, the Indian firm said on Wednesday. They did not disclose the size of Krikey’s Series A round, but Jio said Krikey has raised $22 million to date.

Krikey has previously not disclosed any financing rounds, according to their listings on Crunchbase, CBInsights, and Tracxn.

As part of the announcement, Krikey has launched YAATRA, a new AR game that invites users to step in an action-adventure story to defeat a monster army. “Using weapons such as the bow and arrow, chakra, lightning and fire bolts, players can battle through different levels of combat and puzzle games,” Krikey said.

Jio subscribers in India will get exclusive access to a range of features in Krikey, available on Android and iOS, including a 3D avatar, and entry to some game levels and weapons.

“Our vision with Krikey is to bring together inspiration and reality in an immersive way. With augmented reality, we are able to bring fantasy worlds into your home, straight through the window of your mobile phone,” said Jhanvi and Ketaki Shriram in a joint statement.

In a statement, Akash Ambani, Director of Jio, said, “Krikey will inspire a generation of Indians to embrace Augmented Reality. Our vision is to bring the best experiences from across the world to India and the introduction of Yaatra is a step in that direction. Augmented Reality gaming takes the user into a world of its own, and we invite every Jio and non-Jio user to experience AR through Yaatra.”

We have reached out to Jio and Krikey for more details.

Looking Glass’s next product is a holographic digital photo frame

For U.K. Canal Boat Dwellers, Lockdown Can Be Claustrophic — But Also Offers Escape